There are two sayings that I will always remember my mom saying whenever things didn’t happen as anticipated:

I guess age brings wisdom because as a child, teenager and young adult, I failed to understand these sayings and only remember being completely frustrated. But as I ventured into my thirties and beyond, this suddenly started to make sense.

I think the revelations and wisdom have come from the many mistakes that I’ve made in my life… the failed relationships, friendships that fizzled, career choices that disappointed because I wasn’t good enough by imagined benchmarks and standards. With every mistake, I grew stronger. No matter how small, I learned something. And from the lessons, I was able to find the courage to move forward. I found the bravery to step outside of my comfort zone. I learned to love myself without needing validation from others whether it was my physical appearance or the internal battles in my head.

Have I reached my final destination? No. But I’m in a better place today than I was yesterday and tomorrow will bring continued growth.

In 2012, I was officially diagnosed with major depressive disorder and anxiety. Truthfully, this was something I had always battled with, but getting it on paper meant confronting the demons. I finally understood that this wasn’t a bad day or week. This was something that I needed to accept was going to be present, probably for the rest of my life. I fought the perceived stigma of taking anti-depressants for years until I realized that if I didn’t, my suicidal ideation would eventually become a reality and my son would wake up one morning without a mother. I took 3 different tablets before I found the one that worked for me.

In the following months, I was forced into a great deal of introspection and slowly, the realization hit that I was not getting as much joy from my work, as I had in the past. I started wondering if my state of mind was boredom and stagnancy… maybe 12 years with one company had made me lose my drive for more. The undeniable fact sank in that I didn’t want to be in the corporate world anymore. But what do you do when all of your education has prepared you for the path that you no longer want to follow?

Some people may think that maybe I chose the wrong path. But I always loved sciences and still do. I pursued my Bachelor of Science degree in Chemistry and Biochemistry and then followed with my Master of Science degree in Food Science and Technology. Those choices always felt right and allowed me a very comfortable career. Why then did I suddenly feel as though I had made the wrong decision? And was it possible to fix at this stage of my life?

I restarted practising yoga with no other intention than relaxation and after a few months, my yoga teacher offered her first training program… a 500 hour Yoga Alliance certified program. Some aspects were opened to the public as individual sessions and I signed up for all. Those sessions dealt a lot with yoga philosophy and really understanding the roots of where yoga came from. As soon as I attended, I knew without a doubt that I wanted to do this training.

I started planning for 2014. Being a single mother with a recently diagnosed autistic son didn’t make matters easy. However, planning a year in advance was a huge advantage. Godparents were called on for babysitting duties and support as I embarked on yoga teacher training in 2014.

On the 2nd day of training, I told my yoga teacher that I wanted to do this full time. As much as she wanted to, I’m not sure she believed me. But all of the ambiguity in my life suddenly made sense. Turning my back on 14 years of building my career to become a yoga teacher, with an unreliable income, having to hunt for work made sense. And if you don’t know me… I’m a Type A personality, very OCD, Virgo, who plans my life to a T. Yet casting everything to the wind somehow made me feel more confident and secure than I had in years.

I spent the next two years fine-tuning my skills and building my financial safety net. On February 12th 2016, I officially left the corporate world and adopted the new job title of yoga instructor.

Fast forward two years… no regrets but sometimes worrying moments. Finances are tighter than when I had the luxury of a consistent, unvarying pay cheque, but so far I’ve been comfortable and blessed. The one lesson I’ve learnt is that you cannot put a price on peace of mind. I’ve now made peace with myself that my depression and anxiety are not something I can snap out of. They are as a result of a chemical imbalance and I will likely be on medication for the rest of my life. But I’m ok with that. And being in a profession that allows my mental strength to develop is always a benefit. Having a profession that allows me to be connected with a passion that I never imagined possible brings me a greater level of positivity and joy which never previously existed in my life.

Yoga is an experience that will transform your thinking, your views on life and the world. Working hard for something that you love is called passion and I have found my passion in yoga.

Yesterday I completed my very first yoga challenge… you know those ones where you practice every day for a month and post a pic every day 😣😮 Yup, that kinda yoga challenge! And I did it! Now this isn’t the first time I’ve tried something like this. But it’s definitely the first time that I truly committed 110% and for that reason, I achieved a much higher degree of success than in the past. I’m usually the person who always over-commits to everything… so why was this such a stumbling block when I attempted it in the past? Because often the emotional struggles are the ones which threaten to defeat us more than the physical.

My self-esteem has always, and continues to test me. The image in the mirror doesn’t always reflect as I think it should… so the first few days of the challenge, I literally took 2-3 dozen pics each day to find the perfect one to post. Either the lighting looked weird or there was a shadow falling on my face or it wasn’t centred or I knew I could go deeper into the pose.. to the more critical issues of my alignment being a bit off or the pic giving a wrong impression of what the pose should be about.

That obsession bothered me internally and by day #4, I knew that it was something I needed to address. The practice of ahimsa or non-harming as one of the yamas (moral restraints) of yoga is an integral part of one of the eight limbs of yoga. Very often, we forget that non-harming doesn’t only apply to those beings around us, but also to ourselves. And if our words and our thoughts to ourselves are those that criticise and undermine our efforts, then we are causing emotional harm to our inner being. I then promised myself that the first step in breaking this pattern would be to take no more than three pictures each day and accept that whatever those pictures captured, would be where my journey was on that day.

Did I love my pics everyday? Often no… and it required huge amounts of positive self-talk in order to persevere and continue. However, by limiting myself to only three pics, I was able to let go of the expectation of something perfect and instead, truly focus on a positive practice. The pic became a bonus, if it happened. And by day #19, I realized that I was genuinely enjoying the experience. 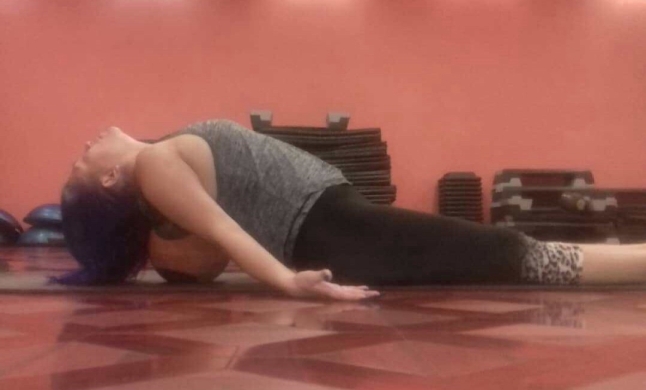 I would love to say that since becoming a yoga instructor, that I practice religiously every single day, but it would be a lie. This was the first time in my life that I did practice daily. Sometimes it was a hot, sweaty, super intense practice. Sometimes it was no longer than ten minutes of easy, gentle stretching. And a few times, it was awesome fun with my favorite #hunnybunny as we played with different poses. 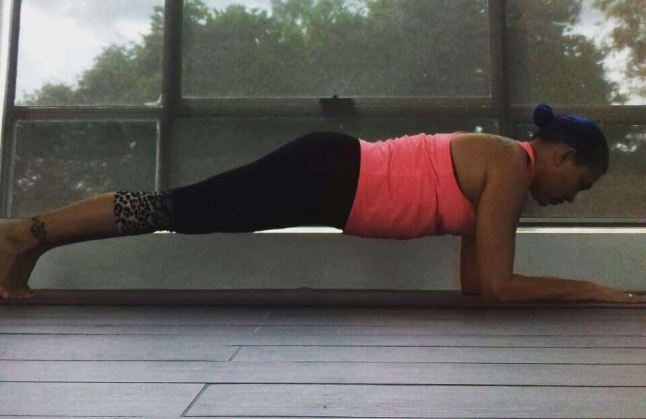 Feel free to check the social media links for my yoga journey… Breathe In Yoga: